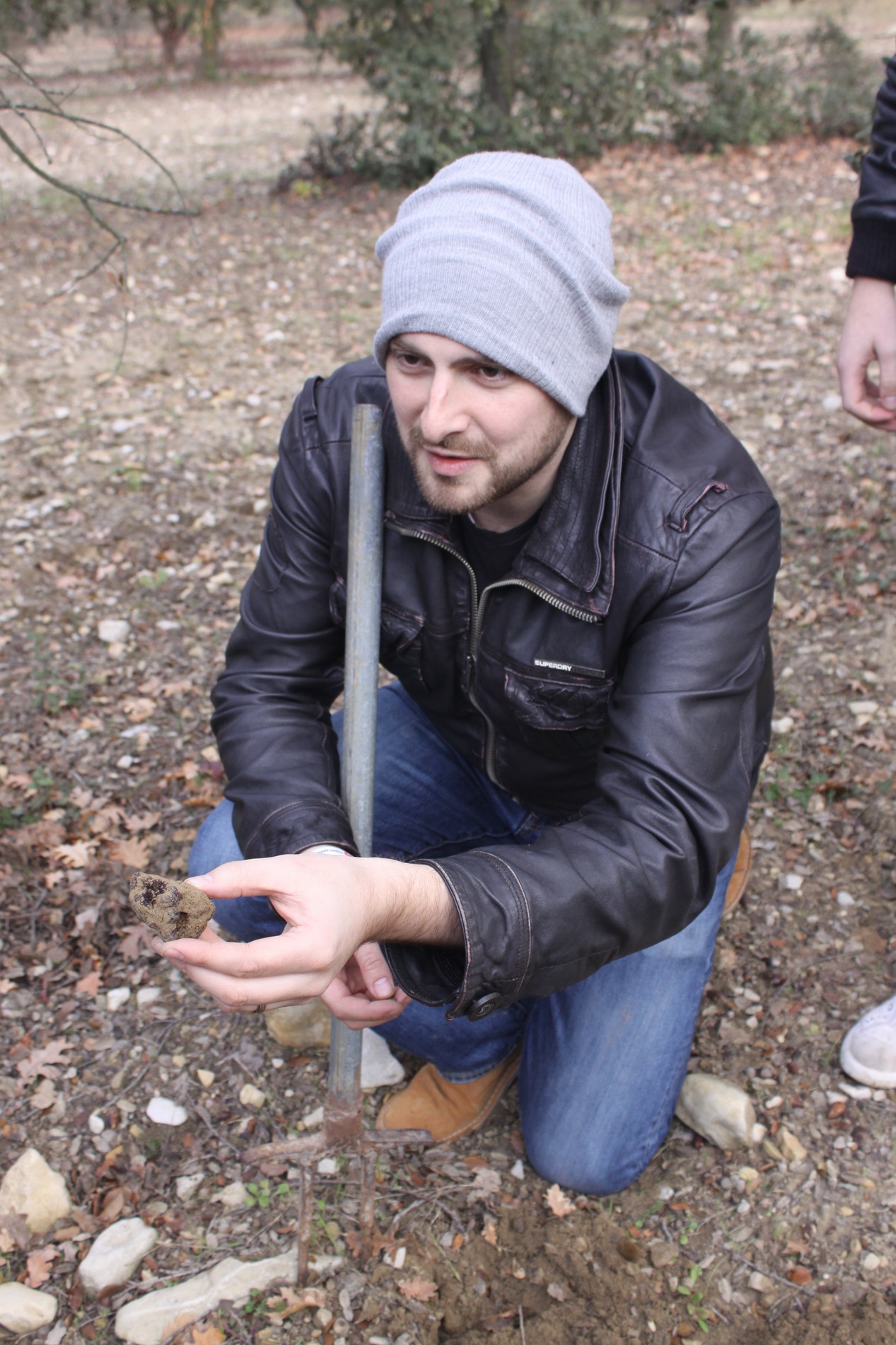 Having picked and eaten wild mushrooms and fungi of various kinds in the UK, there has always been one that has intrigued me by its rarity and reputation: the truffle. It’s a mysterious fungus and one I have never really eaten aside from the usual infusions in oil or salami that crop up in delis. The Italians describe its legendarily permeating odour as ‘gas’ and it certainly has a whiff of a faulty cooker, yet people seem to become obsessive devotees to its unique flavour. Certain areas of France go so crazy for the ‘black diamond’ they even hold a Mass in its honour, swapping the ‘corpus Christi’ wafer for a slice of the stuff.

One of the joys of writing travel features is the potential for adventures to fall into your lap and I jumped at the offer from The Independent to make a trip down to Provence to find the region’s number one winter wonder.

My lovely B&B, ‘Les Ursulines’, was hunkered down amongst the vines a few miles outside Valreas. Passing through the subdued lavender avenues and vineyards now stripped of their fruit, it looked a different region to the lush green and purple place made famous in Peter Mayle’s book, A Year in Provence. If an interior designer were to describe the Vaucluse department in December they would probably give it a name like ‘beautiful/industrial’, for every inch of earthy field is apportioned to profit. Winter is the land’s grand exhale after the harvesting storm. The ground looked exhausted and vines sat exposed, their spines twisted in neat rows, only occasionally fringed with the odd russet, brown and red leaf blowing in the surprisingly warm air. 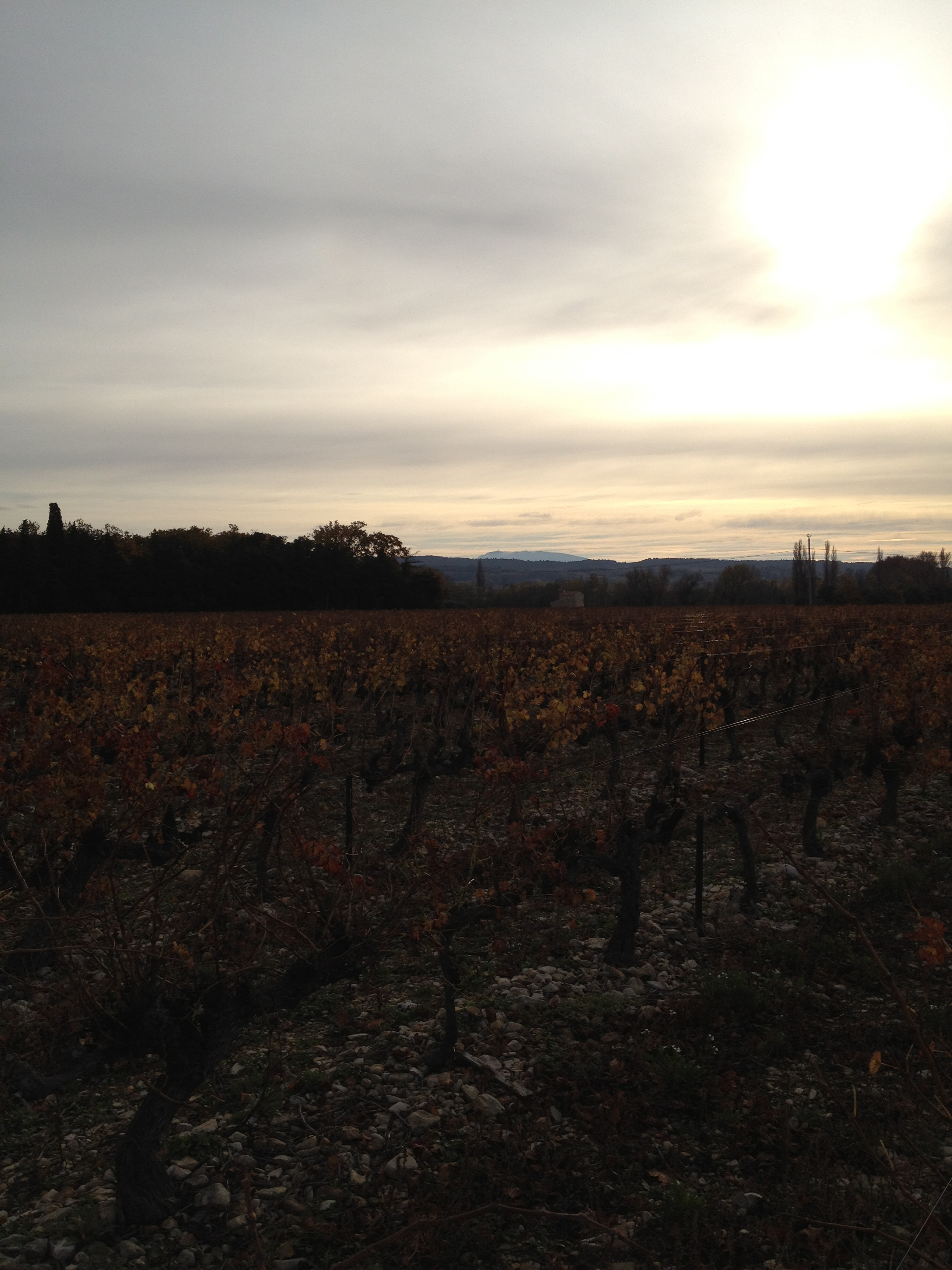 There was still wildness. Mountains dominated the horizon and Mt Ventoux lay like a pile of black grapes ready for pressing under the blue sky. Closer by were the sporadic stands of trees. To the untrained eye these may seem unusual amongst the vines, a waste of space for a place where every square foot is cultivated for a purpose. These aren’t the cypresses planted to provide windbreaks against the famous ‘Mistral’, but rather two types of oak – green and white – larders for the farmers’ winter harvest.

Jean-Pierre, the owner of the B&B, was to be my truffle guide. Unfortunately he spoke no English. Nor did his wife. Despite the best efforts of author Joanne Harris in her previous life as a French teacher, my GCSE-level French is woefully inadequate when trying to pick up the intricacies of the fruiting process of Tuber melanosporum. This added an air of excitement and confusion, but also proved the point that much in conversation is body language.

Jean-Pierre gestured to his car. I got in. Within a minute we were tearing up dust on a little road through the vines and pulling up at an old farmhouse. Men huddled together through the arch smoking and eyeing us suspiciously. Handshakes were exchanged and one

begrudgingly went inside. After a moment, he returned with bespectacled man in a beat-up army jacket and a dog on a length of rope. This was Jacques and Diane, neither of who spoke any English either.

I followed Jacques to his lines of oak. The earth was soft, perfect for prints, and as he guided his faithful hound through the trees, my eyes were drawn down for a spot of impromptu animal tracking. Diane’s prints were everywhere but in patches close to denser vegetation, other pig-like impressions littered the ground. I had my suspicions. ‘Sanglier,’ Jean-Pierre confirmed before making the sign for a rifle, ‘bang bang, very nice.’

Soon Diane was earning her keep, scrabbling a few layers of ground away before Jacques called her away. I bent down beside him and was hit by the pungent smell. The very soil was impregnated with it. I helped Jacques ‘clod’ the ground and then break it up

by hand until I saw it; black, bobbly and about the size of an egg.

The reverence in which the black truffle is held was clear. We stood in silence, possibly due to our lack of a common language, but mostly because of the power of this delicacy. The hunt continued until we had filled a small sackcloth bag.

On the market a black truffle of the sizes we were uncovering may be worth up to £40 each. Sometimes more. There is no question of their value and part of their mystery is that there is no exact science to their cultivation. Impregnated oaks may take ten years to start ‘truffling’ and even then, there is no guarantee. I began to see why people are so insular about them in this area; they are a tax free high-value commodity found in the ground that can make a man rich over a season.

We returned under to the B&B under a purpling sky. In my pocket was a gift from Jacques, a perfect specimen that, even when wrapped in two layers of foil and inside a sealed jam jar in a fridge, still stank out the room. Best served simply, we cooked paper-thin slices of truffle with scrambled egg and served it with wilted chard. The taste was incomparable. Nothing else has the same flavour, a pleasant savoury ‘umami’ as the Japanese class it.

As I returned to England my eyes scanned the fields and forests around the train tracks wondering if any held white truffles, the British edible truffle. To hunt these, it is best to look for areas of disturbed earth, bumps in the forest floor or any line of ants disappearing into a mound. I knew I’d never scan a woodland floor without imagining these subterranean hidden treasures. My clothes still smelt of the fungus and I could close my eyes and imagine its taste; I had become acclimatized.

Few of us forget the utter joy of sending a kite soaring skyward for the first time; the control of the inanimate object, riding the thermals, but making one takes the fun to newer heights. Getting a piece of DIY to fly is an enriching experience that appeals to the child in all of us.

Britain is Europe’s windiest country and, as we found walking over the soft dunes onto Camber Sands in Kent, it is blessed with many breathtaking beaches to act as runways. Under a cloudless blue sky, we took it in turns to be launcher and pilot, shouting ourselves hoarse with joy each time the kite caught the wind and snaked its way into the atmosphere.

Soon we learnt the trick that pulling the line gained altitude and slacking allowed maneuvering. The darting diamond was staying airborne for ten minutes at a time and we found our consciousness following the slender path of string upwards to join it. Nothing else mattered.

People spend years trying to achieve meditative states that allow them to forget themselves, to have an ‘out-of-body’ experience, but this was the perfect short cut, one that every child can attest to watching a bird on the wing or leaf caught in the breeze.

By building a kite, we turn the seaside and coast into another kind of playground, one that really lifts the spirits. For the technique and detailed how-to make a kite from bamboo and bin liner, buy our book now at www.skimmingstones.co.uk!