Walking beside Loch Garten, here in the eastern Highlands of Scotland, it feels like I’m crossing an invisible line. It would be easy to believe I have somehow strayed through time as well as space and wound up in a wild, primeval world, a hidden world worthy of C.S. Lewis and magic wardrobes.

Stretching for 50 square miles on the southern fringe of the Spey valley and lying just north of the rugged Cairngorms, Abernethy Forest is the largest remnant of native pinewood left in the UK, a last relic of the millions of hectares of boreal forest that once stretched across Europe. The lynx, moose, brown bear and the wolves may be gone but it remains a non-human landscape of Scot’s pine, loch and mountain, and it still supports an immense diversity of rare flora and fauna, most of which can’t be found anywhere else in the British Isles. Every spring a charismatic creature returns here to nest; a bird whose remarkable tale of survival is more than just the story of its own victory over persecution, it is a history of conservation itself. The osprey.

My journey to discover this bird’s history in the landscape was broadcast on BBC Radio 3 on Friday night, as part of the station’s ‘Twenty Minutes’ documentaries. Researching, recording and writing it was about as good as a job gets! You can listen again here: 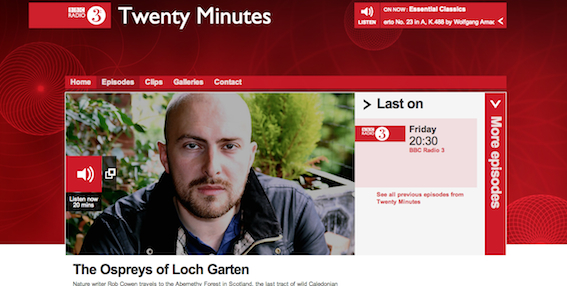