we talk about the value you can derive from visiting the same spot across the seasons, rather than always plumping for somewhere new.

This is never more true than when visiting somewhere as inherently changeable as Lindisfarne, or ‘Holy Island’. I spent some time in Northumberland recently; I revisited the island as part of the trip and was surprised with how different it seemed.

The tides sunder Lindisfarne from the mainland every six hours, which means at certain times of year travelling by land requires heading off before the natural curfew, or staying the night. The same is true when travelling by boat because when the tide is too low there is a risk of getting beached.

Going by boat at the height of summer proved quite unlike the same journey by car in autumn. Instead of long, brooding beaches under low cliffs, it was a land of bright grasses, flowers and the sparkling of gentle waves. You can almost (almost) understand why St. Cuthbert chose to sequester himself on one of the relatively tiny Farne Islands to the south.

Having been there twice I would firmly recommend staying over on the island to witness it in both its aspects, and the rest of coastal Northumberland is of course as beautiful as ever too. 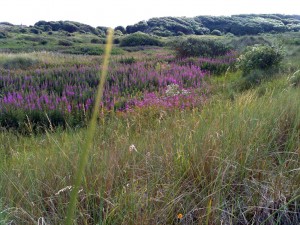 The nature reserve at the foot of Bamburgh Castle 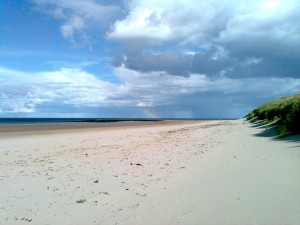 The beach near Alnwick 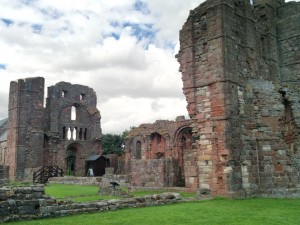