This week involved a trip so brief, bizarre and beautiful it seemed almost dreamlike. I was asked to write a feature for Crufts Magazine that required I spent 24 hours in deepest, darkest Scotland in the company of a couple of dog sled racers and their thirty Siberian huskies.

The journey north was fairly arduous and involved an evening train ride to Edinburgh before I hired a car and navigated the hour and a half through driving snow to a remote area of Perthshire. The final miles were in complete darkness with just the snowfall and black sky. As the Scots pine closed in around the single track road, Highland cattle wandered across casually out of the trees, their caramel, shaggy coats with a fresh crust of white.

The accommodation was basic (a cabin) and cold, but the welcome from owners John and Mary warm and whisky fuelled. At dawn we were up to see a copper and duck-egg blue sunrise glowing over the white landscape and dark tree tops.

The husky racing was thrilling to behold and I have never seen animals happier; it is as if running with a sled somehow scratches an itch that would otherwise drive huskies mad. After an hour or two watching these furry athletes accelerating into the trees, my gaze was drawn to the snow beside the trails. Near the dogs’ unmistakable prints, I noticed other tracks. Rabbits had been lolling through the snow and, close by, another dog-like animal had taken a keen interest. 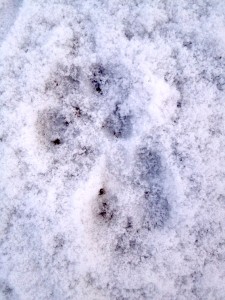 Fox prints in the snow. Note the clear space between front and side pads.

Joined by John and Mary’s toddlers, I followed the fox tracks up and into the thick Scots pine. A carpet of pine needles was disrupted in places by roe deer tracks and we started to see the mini motorways used by the animals that call the woods home. Footprints, chewed stems, pine cones nibbled by the red squirrels; the joy of animal tracking is piecing together the stories that unfold in such places. By taking the time to walk away from the usual trails, slow down and read the ground around us, we enter into a new way of looking and relating to the landscape.

Once they had learnt what each was, it was lovely to see the kids picking out the prints for ‘Mr. Fox’. In our chapter on animal tracking in the book, we discuss how tracking elicits a physiological as well as psychological change, one that brings us closer to every landscape. We connect on another level, down amongst the leaves. Perhaps at the heart of this ancient art is this sense of ‘becoming’ with the landscape and its inhabitants. Their natural inquisitiveness sparked off a wonderful creativity. They told me about their favourite ‘rooms’ in the woods and where they met ‘the leprechauns’ for dinner. I asked what other creatures they’d met in the woods and their answer stopped me in my tracks: ‘big cats’.

I studied the snow and mud even more intently as we drifted back to the husky trails. A noise from the hill behind and John came whizzing past with a dog team of six, the huskies bounding en masse in perfect synchronicity, ears pinned back, tongues wagging. Later, over tea, John and I talked about his children’s wonderful playground and I related the beauty of their imaginary worlds, mentioning the stories of big cats. “Ah.” said John. “That bit wasn’t a story.”

There was a beautiful and revealing interview with David Hockney on Radio 4 over Christmas, which I have only just had the chance to listen to. It was in honour of his forthcoming exhibition A Bigger Picture, the vivid reflections of the East Yorkshire landscape he grew up amongst and has spent the last two years absorbed in. He even relocated from California to Bridlington to complete the project. 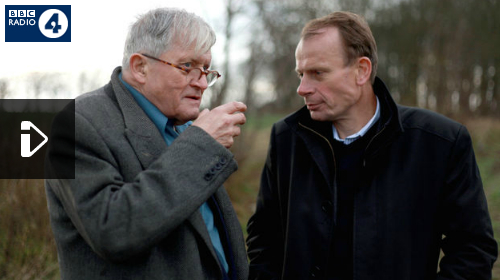 As Andrew Marr and Hockney walked the muddy tracks through the trees they discussed the powerful influence of the land over the artist. Most interestingly, the way Hockney felt an intense connection to nature that developed during the project. He has been returning to paint, photograph and sketch the same spot with an obsessive regularity, out in all weathers to try to capture the essence of the place by being present in the myriad variants of weather and light that happen at different times of the day and the season.

Hockney’s ‘excuse’ for being out in nature is the paintbrush, but it could have been anything – carving an elder whistle, making a fishing float from a feather, tracking the prints of animals. The point is that his activity rooted him utterly into the place. This is also a defining principle of our book, Skimming Stones and Other Ways of Being in the Wild; it is physically and mentally rewarding to look deeply into nature. It’s not just how many peaks we cover, but how well we cover them. Time spent returning to the same a hill, fishing the same bank of a river or revisiting a wood to sleep in DIY debris den familiarises us so completely with that patch of earth that we can’t fail to feel linked to the greater rhythms of nature and feel a sense of belonging.

As Hockney notes in the interview, “In April for six weeks the landscape changes daily.” He became attuned to the variants and noted how even the same metre of earth can change radically from dawn to dusk. Hockney even started to relearn the names of plants like the wild carrot or ‘Queen Anne’s Lace’ so he knew what he was painting. This prompted in him a deeper way of looking, a sense of scale and understanding of how the miniature landscape constitutes the whole.

In the final chapter (on wild walking) in our book, we set up a tent on the summit of Haystacks after many hours of fell climbing. All day we had been taking in grand vistas and sweeping views of the Lakeland hills, but had also been using natural navigation techniques to determine our bearing: reading the rings on tree stumps, employing the tree-tick principle as a rudimentary compass. This had forced us to look more closely at every aspect of the fells and as we sat with our legs aching in this lofty perch we naturally took in the details all around us.

A few metres before us lay a small stretch of water that mirrored the same colours of the setting sun as Buttermere hundreds of feet below. The heather, twisted and green seemed like a Bonsai forest and the meadow pipits that picked about it, giant winged dinosaurs. We both watched the scene unfurling above the clouds in quiet absorption, the sky framing the stage with changing backdrops of golden, duck-egg blue and pink washes. It was a living landscape painting played out on nature’s ever-changing canvas. 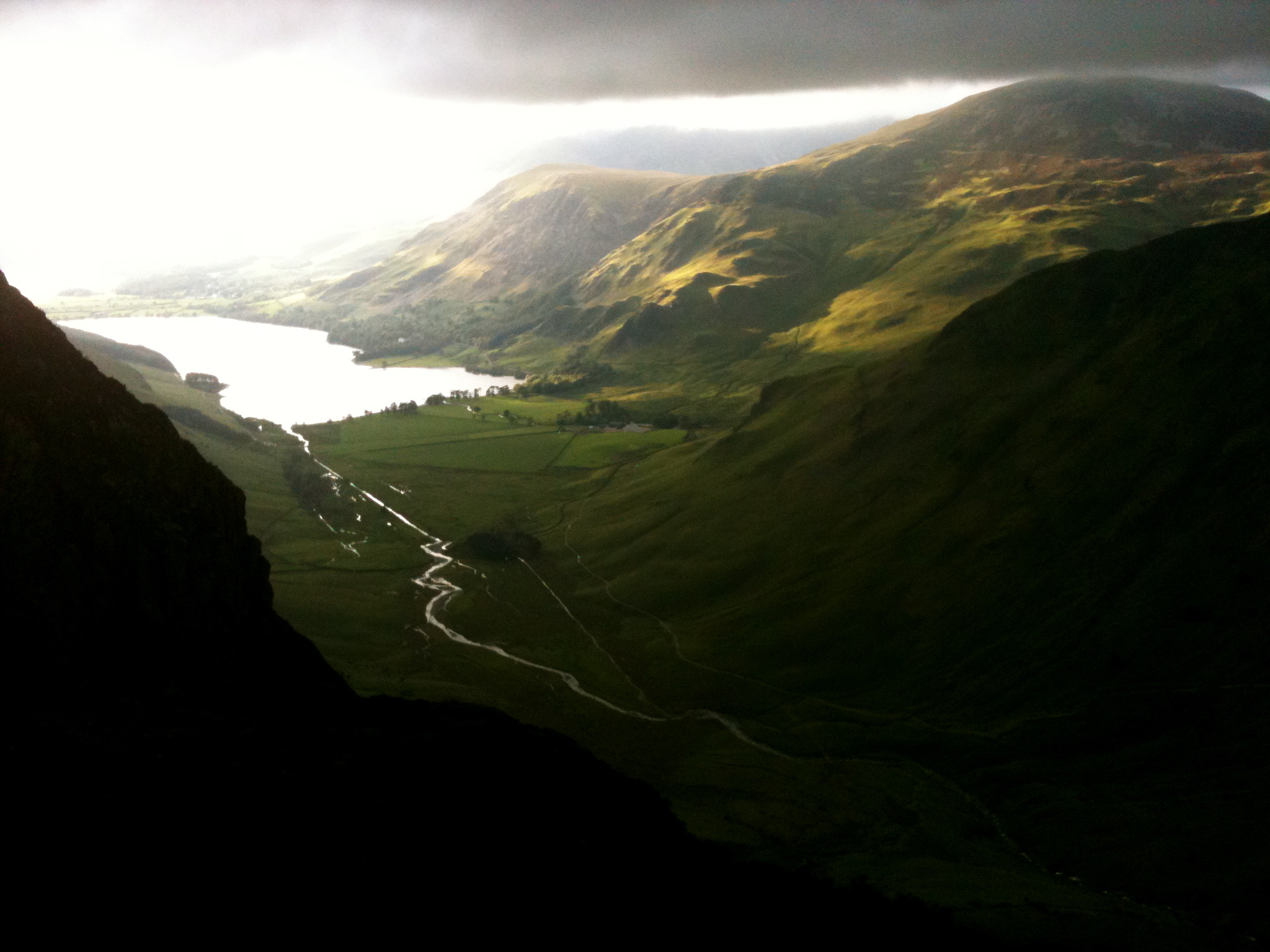